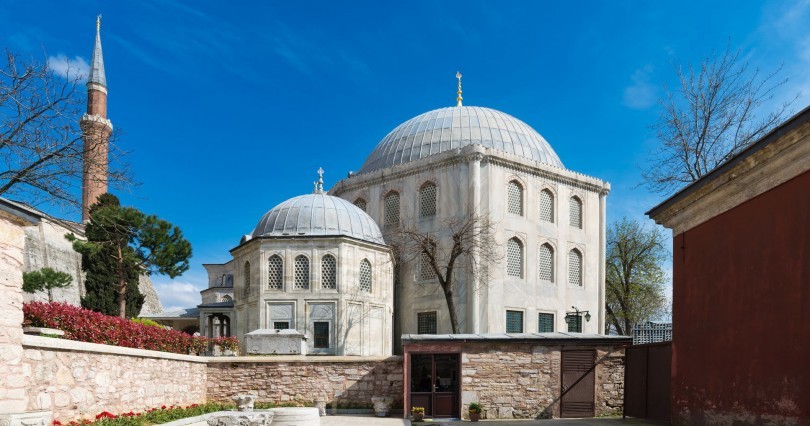 Despite his will to be buried in Selimiye Mosque in Edirne, Sultan Selim the second was buried in Hagia Sophia because it was respected as a royal tomb. His tomb was designed by Mimar Sinan

. With his wifes’ and sons’, there are forty two sarcophagi in the mausoleum.

Decorated with tiles on its walls, the marble mausoleum of Selim II an octagonal layout.

Built by the architect Dalgic Ahmed Aga on the order of Sultan Ahmed I, the mausoleum of Mehmed III who killed his nineteen brother when he came to the throne, has two domes and an octagonal plan. Inside the tomb, there are twenty six sarcophagi including the tomb of Sultan Ahmed and his family.

The tomb has three rows of windows and ornamented interior walls. The dome is supported by six-free standing columns.

The Tomb of Princes

The Tomb of Sultan Mustafa I and Sultan Ibrahim

Baptistery of the Hagia Sophia, was used as a mausoleum of Sultan Mustafa I and Sultan Ibrahim along with 17 other sarcophagi of the members in the dynasty. It has an octagonal internal layout.