The fascinating Mosaics of Hagia Sophia tell us many mysterious things about the history of this 1.500 year old edifice. Though covered and uncovered more than once throughout the history, mosaics outstand on the walls of this masterpiece.

On the contrary to the general view, there were almost no figurative images in Justinian Hagia Sophia. Geometric embellishments, flower, fruit ornamentations and crosses were used in the capitals of the columns, the walls and borders.

You can see the examples of this decoration on the walls of the inner narthex and small crosses and diamond shaped decorations from these times are still available around the calligraphy of M. Izzet Efendi on the main dome.

In 726, there were many superstitions about the mosaics and icons of Hagia Sophia. People used to come and make a wish or even pray in front of the icons. So, an iconoclast period began with the effects of Muslim belief on the prohibition of image and icon worship. Leo III destroyed the pictures, mosaics and icons in the churches. Iconoclasts means the image breakers. It was may be the first big harm to the mosaics. They destroyed the mosaics except the Seraphim. Then Constantine V continued to destruct many images and icons of all over the churches in the city. The end of the reign of Theophilos was an end for this period. As soon as Theophilos died, redecoration of the church began and icons were reinstalled in Hagia Sophia. This final victory of Holy Images in 843 is still celebrated as the ‘’Triumph of Orthodoxy’’ on the first Sunday of Great Lent.

In the north and south tympanum, there were mosaics made during the restoration. On the lower register: ‘’The Church Fathers’’, on the middle register: ‘’Prophets’’, on the top register: ‘’Angles and Apostles’’ were depicted.

Figural mosaics dated to Basil I. Until the 14th century, the mosaic art reached its peak. After the conquest of Constantinople by Mehmed II, the mosaics especially the figurative ones and the ones to reach easily were whitewashed and covered. However, Mehmed II left and preserved some main mosaics even the ones with Christian figures such as the Mary and the Child. By the way, it is believed that the dome was originally decorated with a cross and then a mosaic of Christ the Pantocrator as in Fethiye Museum (Church Pammakaristos). Mary and the Christ image which is generally in the middle of other figures implies the presence of God is always among people. 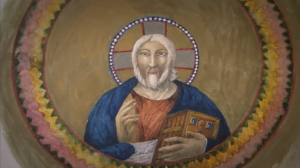 Fossati drawing of Hagia Sophia’s main dome-It was believed that originally there was a huge cross and later a mosaic of Christ Pantocrator which is thought to have collapsed in a earthquake.

The arch of the main dome was decorated with the depiction of the throne of Christ, a mosaic of John the Baptist and Mary. There was also a portrait of John V. Palagios on the lower part of the north arch. Some mosaics remained intact until the 18th century and some of them sold by vile employees. However, the rest of the mosaics were plastered during the reign of Suleyman the Magnificent.

In 1847, Abdulmejid employed Gaspare & Guiseppe Fossati brothers to restorate and design Hagia Sophia. Along with the redecoration, they uncovered the mosaics. When they showed  the golden tesserae mosaics to the Sultan, he was amazed and at first, he thought that the brothers made those mosaics and got angry at them thinking of the expenses they made. Having understood that they dated to earlier eras, this time Sultan was angry with his ancestors for hiding them. Nevertheless, he had to do the same thing for fear of the people’s reaction. Upon this, mosaics were plastered and painted by Fossatis. They decorated the walls with Justinianic patterns, flowers, geometric shape and a Gothic style rosette which they designed to be able to hide them.

During the decoration, they recorded and copied the mosaics which aren’t on display at the moment. The Fossati Brothers gave a sketchbook of the mosaics to Abdulmejid, too. 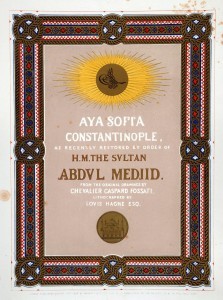 In 1931, in the leadership of Thomas Whittemore, the Byzantine Institute took the responsibility of recovering the mosaics of the Hagia Sophia after getting touch with the founder of the Turkish Republic-Atatürk who also turned Hagia Sophia to a museum.

In 1932, the arduous works began on restoration of the mosaics.  In 1935, Hagia Sophia reopened as a museum. The project of the Institute continued about 18 years.

In 1953, after the death of Thomas Whittemore, the archive of Byzantine Institute were handed over to Dumbarton Oaks.

Be cheerful, enjoy your life T-Shirt
Buy on Amazon