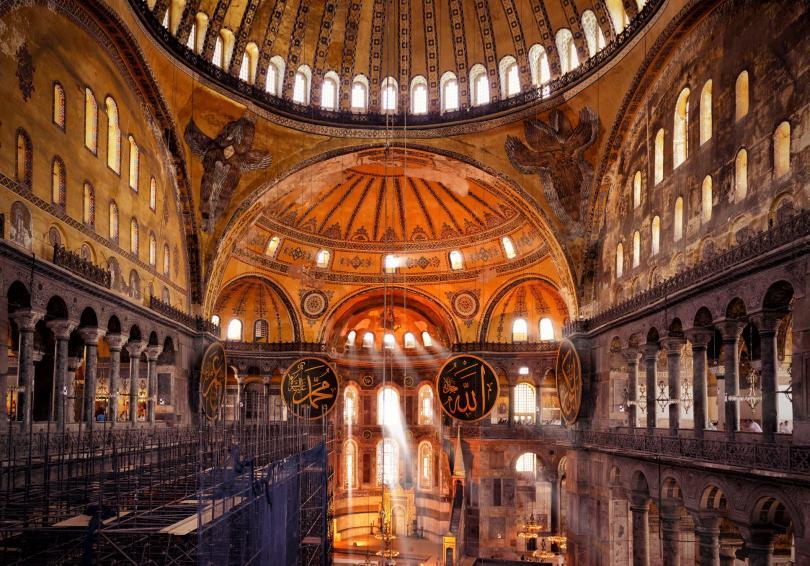 Hagia Sophia is one of the most beautiful places to visit by tours thanks to the amazing history it has. In Turkey, guided tours are cheaper than other countries. You can visit Hagia Sophia either with an entrance ticket or in company of a guide. We have collected the best Hagia Sophia Tours for you as Hagia Sophia Research Team. In this collection, you can see the price, content of the tours, and the satisfaction of the attendants.

1- Hagia Sophia Guided Tours (click-1) or (click-2) : The tour begins at the bus stop of Big Bus in front of Hagia Sophia where your guide waits for you. In the entrance of the museum, You will be accompanied with your guide who will show you the must-see places of Hagia Sophia and give you the best information about the museum. You do not need to buy any tickets and wait in line for this tour. Just be ready on time at the meeting point, that’s enough! The price of this ticket is about 21 euro. It is the best-selling Hagia Sophia Tour and it was hundreds of positive comments.

2- Hagia Sophia and Historic Peninsula Tour (Click): It is the most appropriate tour for visiting the Blue Mosque, Grand Bazaar, Hippodrome and other important places in addition to Hagia Sophia. The tour span is 8 hours and all the entrance and transport fees are included.

3- Special Byzantine Tour (Click): You can see the most important Byzantine works in İstanbul in accompaniment of a proffesional tour guide.

The 8-hour-long-tour begins at 9 a.m. in the Chora Museum which has the best examples of the East Rome mosaic art. You will visit Fener Rum Patriarchate which has been the center of Orthodoxy since Constantine the Great.

After the visit of the Patriarchate, you will visit Pantokrator Church which is one of the most beautiful examples of Byzantine work of art. Then, an extensive Hagia Sophia tour begins. At the sunset, you will see the Basilica Cistern. The price of this ticket is about 200 euro. This tour gives the chance of visiting the most important Byzantine works with a proffesional tour guide.

“The church presents a most glorious spactacle, extraordinary to those who behold it and altogether incredible to those who are told of it. In height it rises to the very heavens and overtops the neighboring houses like a ship anchored among them, appearing above the city which it adorns and forms a part of… It is distinguished by indescribable beauty, excelling both in its size and the harmonies of its measures…’’ So wrote the chronicler, Procopius, fourteen centuries ago, describing Hagia Sophia as it appeared during the reign of its founder, the Emperor Justinian the Great. 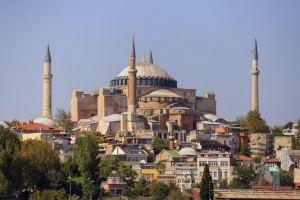 Hagia Sophia, the church of the Divine Wisdom, was dedicated by Justinian on December 26 in the year A.D. 537. For nearly a thousand years thereafter, Hagia Sophia served as the cathedral of Constantinople and was the center of the religious life of the Byzantine Empire.

For almost five centuries after the Turkish Conquest it ranked first among the imperial mosques of Istanbul, under the name of Aya Sofya Camii. Hagia Sophia continued to serve as a mosque during the early years of the Turkish Republic, until it was finally converted into a museum in 1935. Now, emptied of the congregations which once worshiped there, Christians and Moslems in turn, it may seem just a cold and barren shell, devoid of life and spirit. But for those who are aware of its long and distinguished history and are familiar with its architectural principles, Hagia Sophia remains one of the truly great buildings in the world. And it still adorns the skyline of the city as it did when Procopius wrote of it fourteen centuries ago. 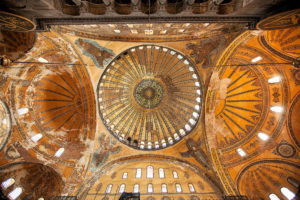 This church was destroyed by fire on 20 June 404, during a riot by mobs protesting the exile of the Patriarch John Chrysostom by the Empress Eudoxia, wife of the Emperor Arcadius. Reconstruction of the church did not begin until the reign of Theodosius II, who succeeded his father Arcadius in the year 408. The second church of Hagia Sophia was completed in 415 and was dedicated by Theodosius on October 10 of that year. The church of Theodosius eventually suffered the same fate as its predecessor, for it was burned down during the Nika Revolt on 15 January 532. 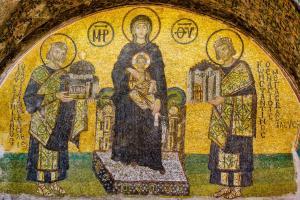 The chronicler Procopius, commenting on the destruction of Hagia Sophia in the Nika Revolt, observed that “God allowed the mob to commit this sacrilege, knowing how great the beauty of this church would be when restored.” Procopius tells us that Justinian immediately set out to rebuild the church on an even grander scale than before. According to Procopius: “The Emperor built regardless of expense, gathering together skilled workmen from every land.”

Justinian appointed as head architect Anthemius of Tralles, one of the most distinguished mathematicians and physicists of the age, and as his assistant named Isidorus of Miletis, the greatest geometer of late antiquity. Isidorus had been the director of the ancient and illustrious Academy in Athens before it was closed by Justinian in the year 529.

Isidorus, who was placed in charge of the building of Hagia Sophia after the death of Anthemius in the year 532, is thus a link between the worlds of ancient Greece and medieval Byzantium. Just as the Academy of Plato had been one of the outstanding institutions of classical culture, so would the resurrected Hagia Sophia be the symbol of a triumphant Christianity, Byzantine style. 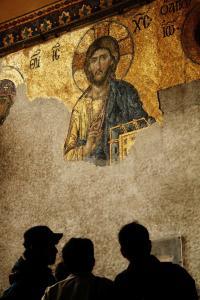 The new church of Hagia Sophia was finally completed late in 537 and was formally dedicated by Justinian on December 26 of that year, St. Stephen’s Day. Hardly had the church come of age, however, when earthquakes caused the collapse of the eastern arch and semidome and the easthern part of the great dome, crushing beneath the debris the altar with its ciborium and the ambo.

Undaunted, Justinian set out to rebuild his church, entrusting the restoration to Isidorus the Younger, a nephew of Isidorus of Miletus.

The principal change made by Isidorus was to make the dome somewhat higher than before, thereby lessening its outward thrust. Isidorus’ solution for the dome has on the whole been a great success for it has survived, in spite of two later partial collapses, until our own day. Restorations after those collapses, in the years 989 and 1346, have left certain irregularities in the dome; nevertheless it is essentially the same in design and substantially also in structure as that of Isidorus the Younger. 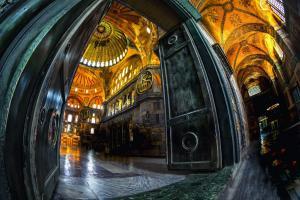 The Emperor Door of Hagia Sophia.

The doors of Hagia Sophia were opened once again at sunrise on Christmas Eve in the year 563, and Justinian, now an old man in the very last months of his life, led the congregation in procession to the church. Here is a poetic description of that occasion by Paul the Silentiary, one of Justinian’s court officials: “At last the holy morn had come, and the great door of the newly- built temple groaned on its opening hinges, inviting Emperor and people to enter; and when the interior was seen sorrow fled from the hearts of all, as the sun lit the glories of the temple. “Twas for the Emperor to lead the way for his people, and on the morrow to celebrate the birth of Christ. And when the first glow of light, rosy-armed, leapt from arch to arch, driving away the dark shadows, then all the princes and people with one voice hymned their songs of praise and prayer; and as they came to the sacred courts it seemed as if the mighty arches were set in heaven.”

Although Hagia Sophia has been restored several times during the Byzantine and Ottoman periods, the present edifice is essentially that of Justinian’s reign. The only major structural additions are the huge and unsightly buttresses which support the building to north and south. 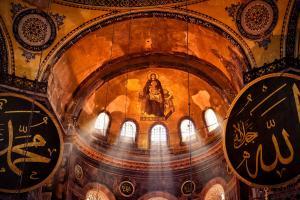 Originally erected by the Emperor Andronicus Palaeologus in 1317, when the church seemed in imminent danger of collapse, they were restored and strengthened in Ottoman times. The four minarets at the corners of the building were placed there at various times after the Conquest, the southeast minaret by Sultan Mehmet II, the one to the northeast by Beyazit II, and the two at the western corners by Murat III, the work of the great Sinan.

The last extensive restorations were commissioned by Sultan Abdul Mecit and carried out by the Swiss architects, the brothers Fossati, in the years 1847-49. As a result of this and later minor restorations and repairs, Hagia Sophia is today structurally sound, despite its great age, and looks much as it did in Justinian’s time.