7- The First Seven Steps: Mary is walking toward her mother with the help of a maid.

8- Accompanied with two servants, Joachim & Anna are hugging Mary. In each side of them, there are two peacocks. The peacocks symbolize the nobility and resurrection. According to a legend that the flesh of a peacock doesn’t decay quickly, it’s also the symbol of immortality. And due to the eyes on its tail, it is also a symbol of God who sees all.

9-  Mary is taken by her father to three priests who are going to bless her. The hands of Joachim is covered because of touching a sacred one.

10- On his promise to give her in the service of God, Anna & Joachim bring the three year old Mary to the temple. Now, Mary is seated on the altar and the archangel is giving holy bread to Mary.

11- Virgin seated on an altar in the church is taking bread from the archangel Gabriel. She has the monogram ‘’Theotokos’’ over her head. 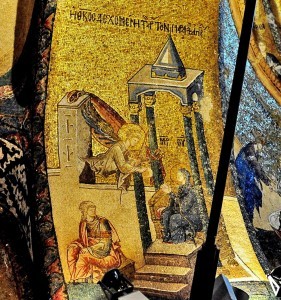 12- There are three priests on the stairs of the church. They are giving skeins to the virgins. One of them is Mary who takes the purple one which symbolizes the nobility of Mary. 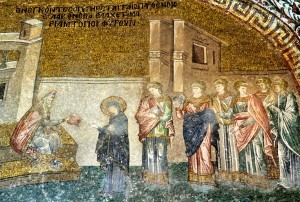 13- On the top of the ciborium, 15 years old Mary is seated with 12 rods in front of her. The rods are from the prospective grooms who are widowers and will seal the fate of her. Zacharias is kneeling down before Mary. 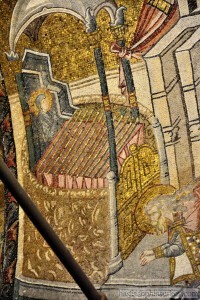 14- When Joseph’s rod branches out, Joseph is accepted as the husband of Mary. Zacharios stands behind Mary and Joseph is walking toward them. Behind Joseph, the other prospective grooms are standing.